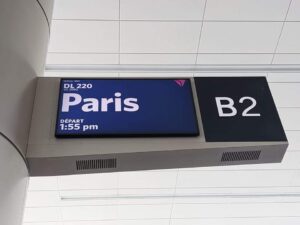 It seemed ironic to be flying from Salt Lake City to Paris after our layover from LAX since the midterms were showing us once again how backasswards we really are, in contrast to Paris, one of the most beautiful, cultured, sophisticated cities in the world.

But I didn't care. I was going to spend a week in Champagne winetasting with three women. Life could be worse.

The flight was long and uneventful, but for the one spot of turbulence that pitched my canned bubbly to the ground, confirming that God does have a sense of humor. The aluminum cauldron of alcohol was supposed to at least aid in sleeping. It didn't.

We arrived at De Gaulle a little bleary but buoyed by the fact we were away from home. Change is one of the things that keeps life interesting, but one of the things we resist the most, ignoring the big change we all face in the end. I promise to keep the sardonic comments to a minimum which should be easy since, as I may have mentioned, I'm in France and would shortly be drinking Champagne with three women;).

The day was cloudy and cold when we landed in Paris, a moist wind blowing in my face from the west. I took my seat in the back of our white, four-door Renault Talisman with Janelle, happy to have Lillie drive while Nancie navigated us through the undulating green hills east of Paris to Epernay in the heart of Champagne. 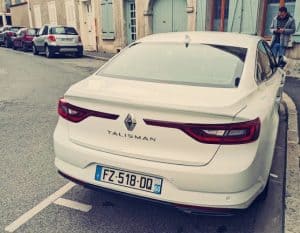 We parked on the city street outside our VRBO as I trundled through the parking app, stumbling at every turn. Apparently, my two weeks of French lessons from Duolingo weren't enough to procure parking. In fact, the three phrases I'd committed to memory-"où est le bar, où est le champagne, and où est le Vin"- didn't help at all. Fortunately, Lillies high-school French came to the rescue, and we were successful. At least I haven't seen a ticket on my credit card bill yet.

Our apartment wouldn't be ready until 230, and it was in the low '40s, so we ducked into a coffee place (Kitch Cafe, 4 Rue Saint-Remy) for a welcoming, warm room and much-needed double latte. The quirky menu on the wall was festooned with comic figures of Superman, Batman, and Queen Elizabeth holding some sort of cuddly creature and sporting a likeness of Freddie Mercury over her left breast. The meaning behind the symbolism eluded me.

We reluctantly headed out into the frigid air and toured the quaint downtown, window-shopping and ducking into several boulangeries and fromageries to get a whiff of what heaven smells like if you're French. With some time left before check-in, we headed over to the Avenue de Champagne (sort of like the red-light district in Amsterdam, but with Champagne instead of sex workers) for our first sampling of Haute Sauce. 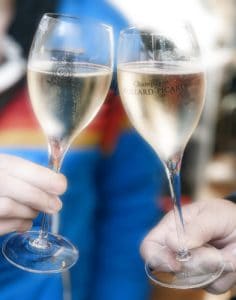 Collard-Picard's small but elegant tasting room suited us perfectly since it was warm inside, and bottles of bubbles sat on the bar waiting to be quaffed. A young bonne femme greeted us and told us about the house. It was relatively young but traced itself through four generations of champagne makers via partners Olivier Collard and Caroline Picard.

As we tasted, I made the obligatory joke about Star Trek's Captain Pickard and wondered if the Ferengi and Borgs ever enjoyed a quaff of the Golden Gargle. Everyone agreed that my jokes were bad but the flight of three Champagnes was excellent, my favorite being their Prestige Extra Brut, a traditional blend of Chardonnay, Pinot Noir, and Meunier. Regrettably, we had to leave our warm environs and walk a short ten minutes to meet Chloe, the owner of our flat (Oasis boho-champenois en hyper-centre).

The apartment was in a perfect location, within walking distance from almost everything in town. Inside it was light and airy, tastefully appointed and roomy, with three bedrooms. We unpacked and relaxed before walking five minutes to Sacre Bistro, thanks to Lillie, who'd made a reservation before we left L.A. 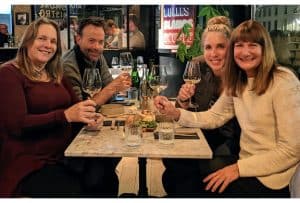 The champagne list was extensive, and Janelle chose a Bollinger RD 2004 (recently disgorged) Extra Brut to start. It had aged well, like Angela Basset. The food was quite good, the chicken dishes exceptional.

We finished with a cheese plate and bottle of Waris-Larmandier 2013 Grand Cru Blanc de Blancs, which paired perfectly with the cheeses, and the waning moments of a beautiful day. I guess writing a blog like this reminds you that friendship is built from the experiences we share, and a million little moments like these. Cheers!

-“Travel is fatal to prejudice, bigotry, and narrow-mindedness, and many of our people need it sorely on these accounts. Broad, wholesome, charitable views of men and things cannot be acquired by vegetating in one little corner of the earth all one's lifetime.” -Mark Twain